Welcome to Smiles Incorporated, the only business in this city that is willing to hire you. Your new occupation demands you spend most of your waking hours processing my extensive paperwork, the purpose this serves will not be explained.

You will be paid the approximate amount required to keep you alive, be grateful. You are not encouraged to fraternize with other employees, be responsible. Your opinion does not matter, be quiet.

You may take a brief moment to appreciate the opportunity for survival that your generous new boss has afforded you.

Use the arrow keys to guide her.

Use the C key to make her touch anything.

Use the X key to make her xamine anything.

Use the Z key to make her look at the photograph.

to the HeIghTs oF MY HEART.exe 53 MB

a wonderful game to make you feel the worst of things! but fr amazing game, i just wish it didn't seem so realistic, like i had to google to make sure this wasnt based off a real event

Me and the homies at work :') I didn't know this was about transphobia and I was like "Oh this hits so close to home" Really good game and related way too much to it...

I feel so bad... One, this game is beautiful and heart-wrenching. Two, I wanted to know what happened when Jamie died because I'm apparently a sadistic a-hole, and then I killed her over and over until I couldn't pick the paper up anymore. I feel dirty for doing it... But I love Jamie, she's awesome, and I wish she didn't die a million times. Not just in this game, I mean I wish that she didn't die in Smiles Incorporated and in this game, and probably in WHILE THE WHOLE WORLD LAUGHS. She is amazing as a character, and I hated torturing her.

this made me cry. Great Game

this hits so hard !! it makes me so mad bc i know these exact same experiences do still happen to people in this day and age. thank you for making this game and depicting a realistic simulation, hopefully someone out there will think twice before alienating others to boost their fragile egos

this game made me soooo mad

That is the end yes.

wow this is just so meloncoly sweet i cried

I like your cover illustration.  It's a concept I've seen before but taken a very different spin.

This is a powerful story, but it is also an incredibly intense game -- I think it could definitely use more specific content warnings than it has for anti-trans harassment and violence, as well as for its very vivid depiction of anxiety.

I think this is an excellent narrative on LGBTQIA+ discrimination in the workplace. I can't wait to see more of your work.

This was such a powerful game with a very important message. The art style was simple and fit perfectly to this theme. One thing I noticed while playing was that when you talked to people, it took a really long time for the message to pop up and then you had to wait for quite a while until it disappeared. Maybe one way to do this would be to change so that the player could press on, for example, enter so they could decide how fast they wanted to read through the conversations? :)

Other than that I really enjoyed this game, keep up the good work! :D

I don't know if you've heard of Game Development World Championship before (gdwc2019) but it's a competition for indie game developers where they can submit their games and it's free! It's great if you want some more visibility for the game and it only takes a couple of minutes to join :) 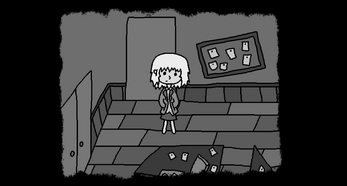 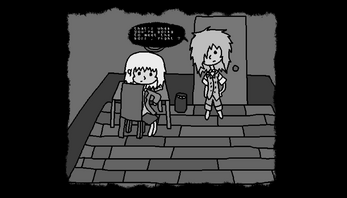 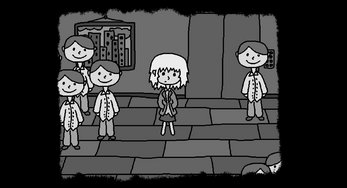